Florencesoft TextDiff reports the differences between two text files on Microsoft Windows. It can also compare two folders and remove duplicates from a list. It is ideal for source code, RTF and XML as well as articles and reports.

Text can be either be pasted directly into the application's text boxes or have files dragged onto its desktop user interface.

Its text difference algorithm is advanced and systematic. It can even spot a paragraph moved around in a document with reordered sentences, deleted and newly added words.

Florencesoft TextDiff is a Windows desktop application and is free to use for the first 30 days. Click here to download the trial software.
Non-Windows users should click here for the online version.

Choice of one combined pane showing all the text changes or two panes with the deleted text in one and the new text in the other.

Choice of comparing at the level of whole lines/paragraphs, words or characters.

See Only The Diffs

Can omit unchanged text from its difference report, revealing just the differences.

Can report duplicated lines in lists and remove them.

A truly novel algorithm that can tell paragraph and sentence reordering from other changes types. 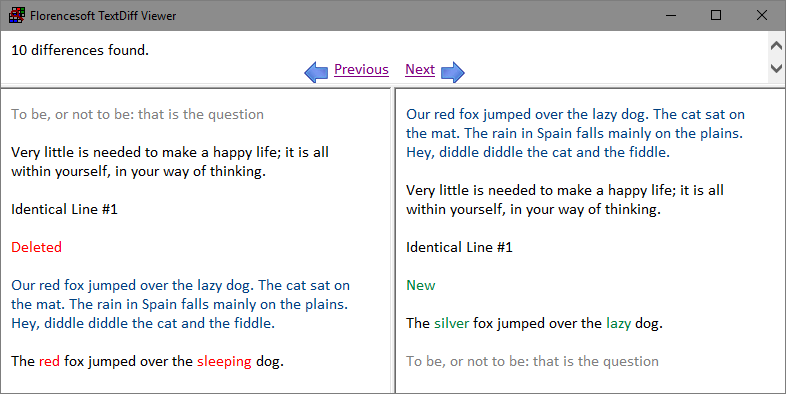 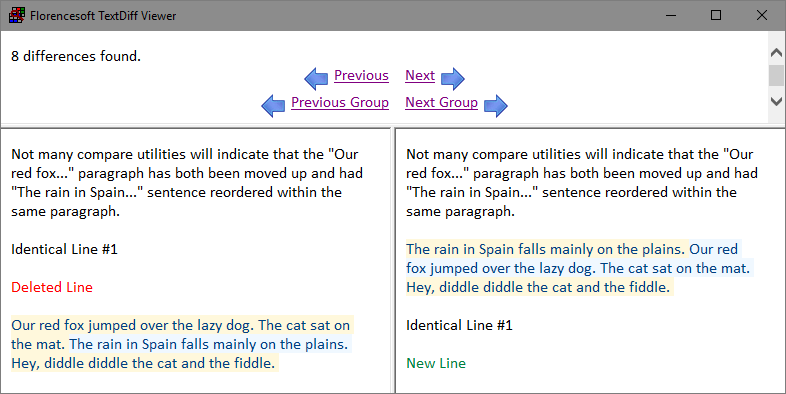 Here is a more difficult case which illustrates the power of our text difference algortihm.

The last paragraph in the window on the left has been moved above Identical Line #1. So our software colors it with blue.

However the paragraph has also had its sentences slightly reordered.

You can see the sentence beginning with the words The rain in Spain has been moved from the middle of the paragraph to its beginning. In total, this sentence has been moved up twice. Once when its containing paragraph was moved up and secondly when it was reordered in its paragraph.

We can hardly highlight this sentence doubly blue!

The software alternatively uses yellow and light blue to change the background color of words and sentences that have been reordered. Most other text comparison algorithms would fail at this stage and just mark the text with red or green to indicate it has either been deleted or added.

It is possible to specify a minimum number of adjacent words or characters before the software will flag them as moved, if appropriate. Unless there is a minimum context, the software could report many occurences of common words such as the and and as being moved. 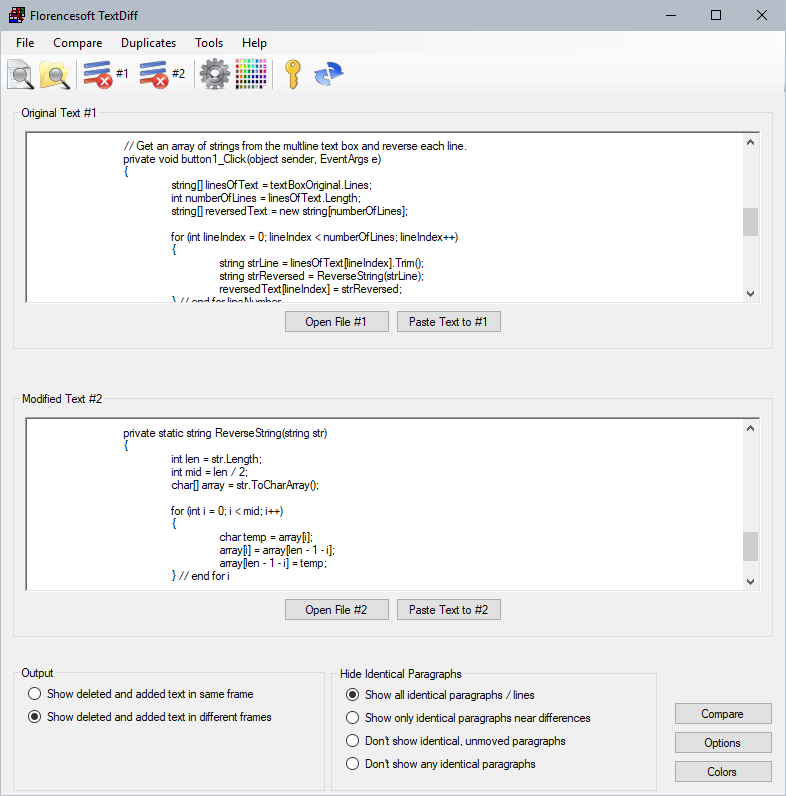 Drag-n-drop or copy-n-paste text files to be compared for differences.

Options For Comparing Text For Differences

Choice of comparing text and source code at the level of whole lines, words or characters. Option to detect text moved around in a document. 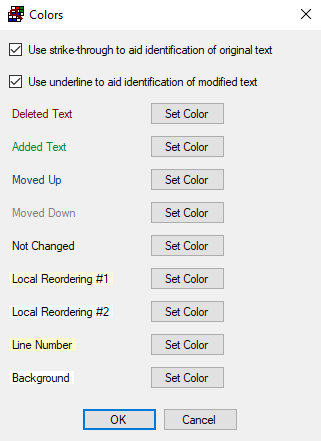 User-selectable colors for the results of comparing text. 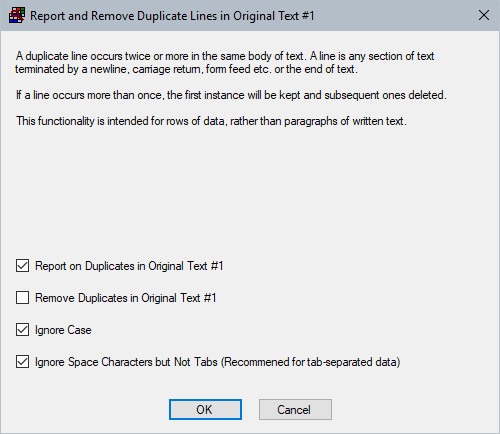 The software can detect duplicated lines and optionally remove them. 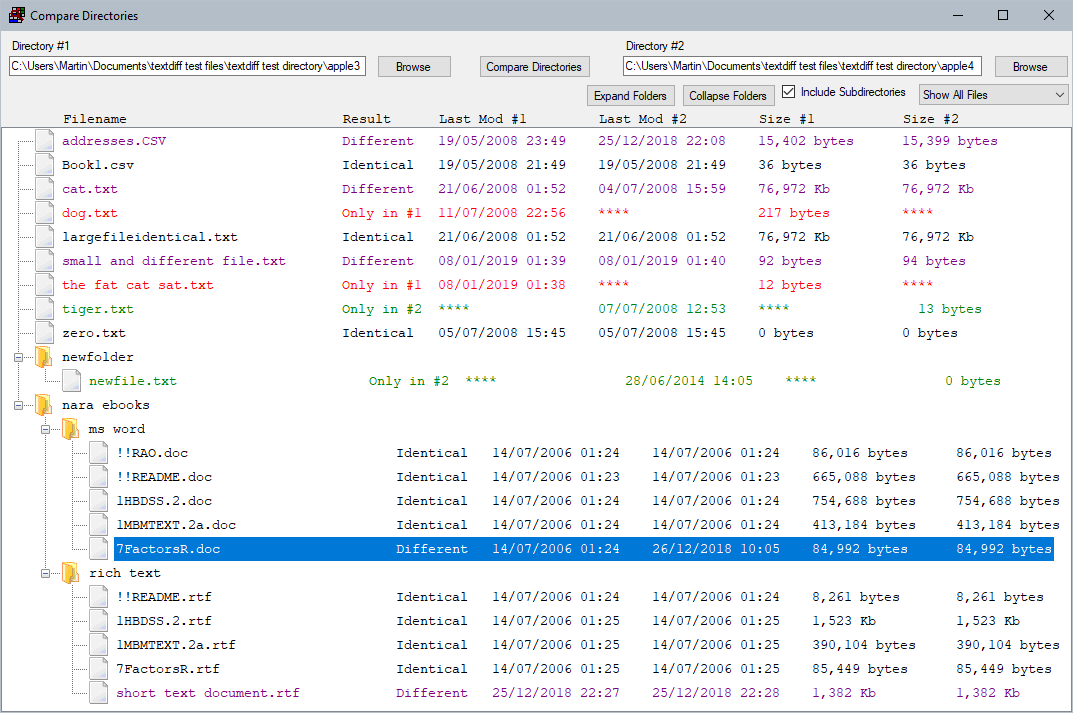 After comparing folders, double-clicking on each entry will report on the text differences between each pair of files. 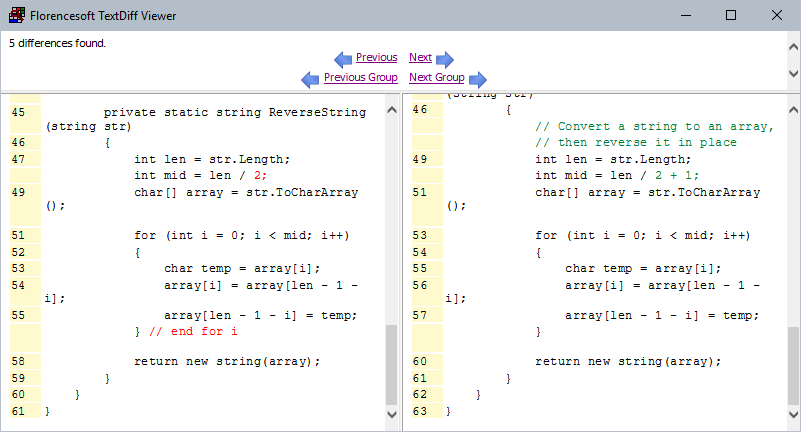 The original and modified text can be shown side by side, with the changes highlighted with color. 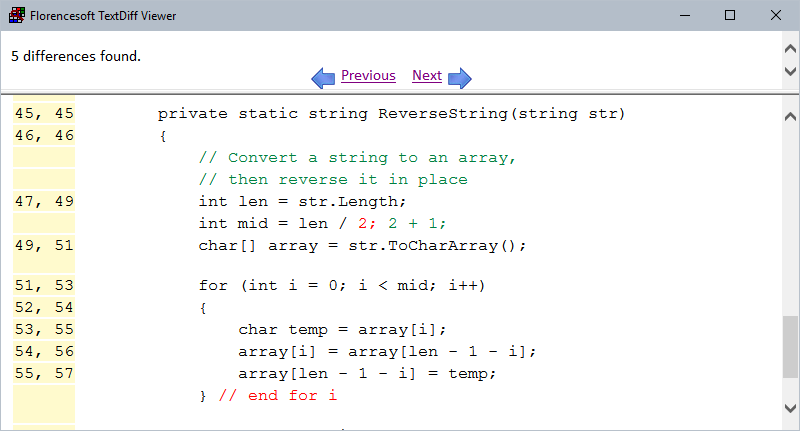 The original and modified text documents can be combined in a single window with changed and moved text highlighted with color.