We have copied selected user reviews from other sites on the Internet, including the Microsoft Store, to this blog post.

Top of class diff tool by Troy on 1st December 2020

The best Diff tool that I've ever used. I've been using the web version for a long time and now that I am working from home and IT Support doesn't have as much control over what applications I can use to be more productive, I had to throw some bucks to Florencesoft for this great tool.

Great Product! The best window app for comparing documents from the Microsoft store and even elsewhere. Excellent for comparing two versions of any legal or academic documents or drafts, customizable settings, array of colors, and many functionality to accommodate individual preferences. The price is also unbelievably low. HOWEVER, I hope the developers will add functionality to handle PDF documents.

This works spectacularly by Jo Stepaniak

This works spectacularly to compare two docs in similar fashion to Word track edits. Until Google Docs adds the doc-comparison feature back, this is the best alternative available for now.

How To Compare Folders / Directories For Changed Files On Windows

Florencesoft TextDiff makes it easy to compare two hierarchical folders (directories) containing text files for differences on Microsoft Windows. This is ideal for software developers working with huge numbers of source files and scripts that make up projects.

The user is given a choice on whether all the subdirectories contained in the two selected folders are compared as well.

The user can select either Show All Files or Show Only Different Files. If the latter is selected, only changed, new and deleted files are displayed. Unaltered files are not displayed. This allows the user to quickly see a list of changed files.

If Show only identical paragraphs near differences is selected on the main part of TextDiff's user interface, then seeing exactly what has been changed becomes easier still when each pair of changed files is double-clicked to show how they differ. 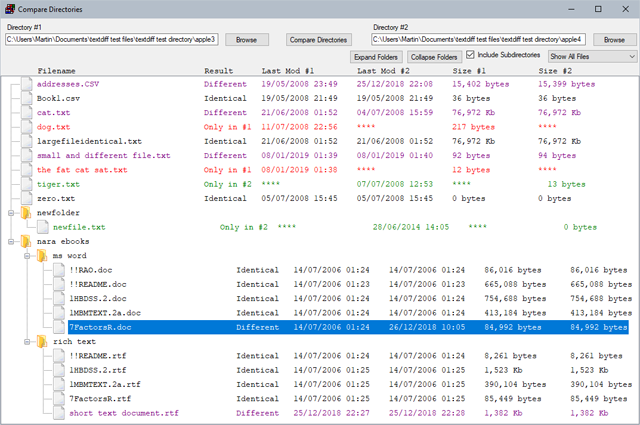 Spread The Word About Our Text Difference Algorithm For Windows

If you like Florencesoft TextDiff (our Windows software to find the differences between two text files), please feel free to tell your colleagues and write what you think on forums, blogs and Twitter.

TextDiff is a fast way to find the differences between text files. Simply drag-n-drop the files onto its user interface or copy and paste the text into its two text panes. Copy and pasting via the clipboard means that it can compare text regardless of its document type.

One of the most useful features of TextDiff is its ability to leave out unchanged text from its reports, so you can immediately see just the differences. It can also show a variable amount of context on either side of each change.

Its text difference algorithm was written from scratch and distinguishes between text just moved around in a document from additions and deletions. Most other compare utilities, based on the longest common subsequence algorithm, cannot do this in any truly systematic way.

Florencesoft TextDiff can also compare two folders or directories against each other and report the new, deleted and modified files.

Functionality is available to find and remove duplicated items in lists, such as names, countries, ingredients etc.

TextDiff is as equally useful for software developers comparing source code, XML, HTML and scripts as for authors writing reports, essays and articles.

As TextDiff is a Windows desktop application, your text is compared locally and is not transmitted over the Internet, as is the case for many web-based text compare tools.

TextDiff allows you to fully control the colors used to highlight changes in your documents.

A free 30 day trial of Florencesoft TextDiff for Microsoft Windows can be downloaded from here.

If you do not use Microsoft Windows, you can use our online, web-based text compare tool instead.

Today we added an anagram generator and a Black-Scholes option pricing calculator to the Microsoft Store. We wrote these pieces of software some time ago as a learning exercise, but we think one may be of some amusement and the other of some use.

Our anagram generator has found that one anagram of "Vladimir Putin" is "I, invalid Trump".

The internal web pages for our anagram generator and Black-Scholes option pricing calculator can be found here and here respectively.